I have made some attempts to run code analysis tools on C# code and I have a couple remarks and examples.

But first, let's clarify what is the technology that makes it so easy to inspect static C# code: the Roslyn compiler.

Roslyn doesn't have a preference for any particular set of rules. The "Rules" are just a plugin. Each of us could write our own set of rules if we wanted to (see "Tutorial: Write your first analyzer and code fix | Microsoft Docs" ).

Visual Studio provides its own implementation of a C# analyzer with its own set of rules. But as it turns out, based on my case study, those rules are not the same ones as the ones implemented and enforced in Sonar for instance. The default Visual Studio analyzer and the default Sonar analyzer are not chasing after the same things. In fact either of this tool might report as a "warning", things that the other does not report at all. I believe that the same thing applies to NDepend.

This means that tools like *Sonar* and *NDepend* are NOT just GUIs to a well established set of rules. Each tool comes with its own philosophy and system of beliefs about what is good or bad practice.

You might then say: whatever then, who's better than Microsoft for setting rules about the language they created, right? Maybe. And maybe not.

In practice, different analyzers are complementary. The analyzer provided by Visual Studio seems better at picking up edge cases related to the language, whereas Sonar seems to operate at a higher (logical) level.

Example of a problem picked up by the the Visual Studio analyzer but not by by the Sonar analyzer :

supposedly will cause Dispose() to be called twice on the 'data' object...

The following code removes the warnings:

Like I said, this was not picked up by Sonar.

Example of a problem picked up by the the Sonar analyzer but not by by the Visual Studio analyzer :
"Comparing to itself always returns true." 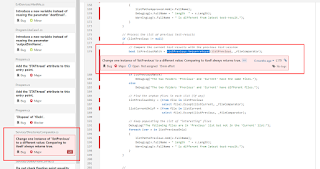 FYI, I've turned on all info and warnings and made them all visible. Visual Studio just does not see the pb with `listPrevious.SequenceEqual(listPrevious)`  :stuck_out_tongue:  Which is a shame, because that is a real bug in production code (a typo, or a bad copy-paste), it's not something I just made up. And Sonar's set of rule was able to detect this.


So in conclusion, my feeling is that Visual Studio's set of rules is better at detecting the "edge cases" related to the actual syntax features of the language and the .NET APIs, (which is only natural since both are Microsoft's creations). Whereas Sonar, being 10 years old, and being born in another world (Java) and supporting many languages, is more capable when it comes to reasoning on the semantic and logical levels.

If I had to rephrase, I think that Sonar just doesn't bother with the flavor of the language; it cares about the logic and the semantics. Whereas Visual Studio tries to make it hard to shoot yourself in the foot with this one particular language; but on the other hand, it will let you write silly code if you want to, as long as you respect the internal constructs and overall code design.


To close on this matter, a final quantitative analysis gives us:

REMARK 1: A shared server is the preferred way to use Sonar, because it is very easy to create projects (one – or more – per developer) and use individual tokens to upload results before checking code in (and browsing results anonymously, in read-only mode, within the company's LAN/VPN). [However, if really wanted, an individual, private localhost instance setup, is possible too, in about 20 minutes when you have a concise documentation.]

REMARK 2: There seems to be a Visual Studio plugin that allows to run Sonar's rule on the fly

SonarLint spots bugs and quality issues as fast as you code.