A French search engine that does not track you. I ve preconfigured for black theme and EN-USA search results but you can create your own custom URL using the settings

And here, below, is the configuration for adding it to your search engines list (and even make it your default search engine if you wish to do so). All the info is contained in one URL. The reason it is so long, is because it contains also the little icon for the Qwant search engine.

I used the site "Ready2Search", which allows you to create instalable search engines "on-the-fly": 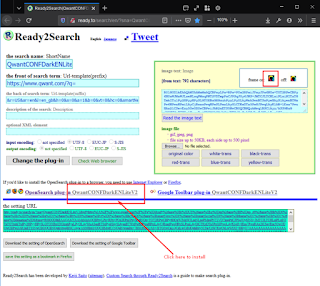 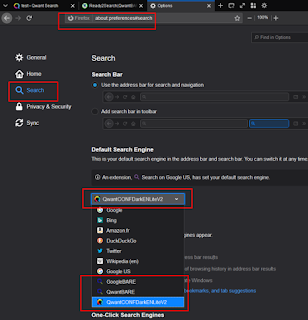 You can customize the Qwant settings to your need: 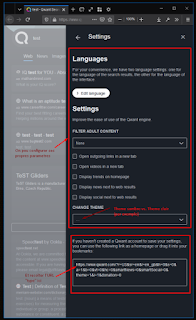 Or create your own search engines.

CAVEAT: setting an icon is a bit tricky, because you need a 16x16px image and the transparency does not seem to work too well, but I haven't diged much into that.
Posted by p19z at October 21, 2019 No comments:

"Why does Microsoft Windows 10 have so many bugs? Ex-Employee tells you why!"
-- by  Barnacules Nerdgasm
"https://www.youtube.com/watch?v=S9kn8_oztsA" 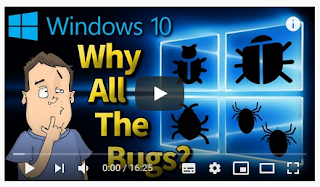 PROBLEM / SYMPTOM: The scintilla-based Text Editor does not save sessions, latest files, nor any configuration. At each start the environment is pristine.

CONTEXT / BUG: SciTE was installed using Chocolatey AS AN ADMINISTRATOR, but is used by a standard user.


SciTE utilities look for an env variable called SCITE_USERHOME and when that is missing will assume a portable installation of SciTE:

This command is the correct one, and we could stop right here. But out of curiosity, let's see how we could make a dynamic variable.


In order to use REG_EXPAND_SZ type variables, we'd have to use the REG.EXE utility. It takes a little bit of escaping to pass the "percent" characters to the command, but this is how it would look:

Use an Administrator account and give the rights on "C:\Program Files (x86)\AutoIt3\SciTE" for the standard user. This will do if there is only one person needing to use the program.

You'll mostly have to look up the documentation of the .ignore files syntax if you want to master this tool and find the right tradeoff/middleground between being specific and being generic about what files you ignore in your project.

In general, you can either 1/ be specific or 2/ use wildcards or 3/ use negation patterns. For instance you could say ignore all "bin" directories, except a particular one:

Notice the exclamation mark at the begining of the second line: it's a negation. It means: DO NOT IGNORE.
=> Those two lines combined, will ignore all "bin" directories, wherever they are in the tree ( double asterix = means any subdirectory ) except that one particular one, named on the next line and prefixed with an exclamation mark.

But saying this I'm only scratching the surface of the power of the .ignore files, you need to look at the doc to know more. (eg. you can have a generic .ignore file at the root of the solution and, for specific cases, other .ignore file(s) in subdirector.y.ies somewhere too)

Last but not least, if you're confident with .ignore file, you can even invoke destructive commands such as "clean" and delete everything that is not under source control ( ie. that is ignored )... which is basically a prequel to REBUILD ALL.

The trend for an "Opt-out"-style philosophy for source control

The old "Opt-in"-style for source control

I remember, when using Microsoft's Team Foundation System and Visual Studio, you'd have two ways to add a file to source control: 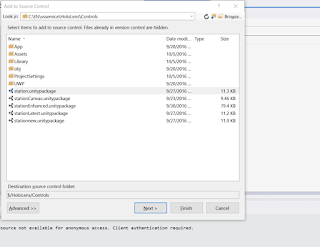 As far as source control goes, everybody is moving to "opt-out"-style policies, instead of "opt-in"-style ones, ( get used to it :stuck_out_tongue_winking_eye:  , 'cause it's actually much safer and nicer in the long run... even if there is an "up-front" price to pay -- ie. setting up your ".ignore" file)

Now, everything is under source control by default, unless you specify otherwise. This is nice because you typically don't get things happening behind your back without you knowing or forgetting (files added, changed or deleted).

Configuring what is ignored

When using the Git version control system, the critical files for specifying what is not meant to be kept under source control are the famous ".gitignore" files.

Visual Studio and Team Foundation System have a very similar concept, except the file is called ".tfignore".

Talks about WASM and WASI [Bookmarks]

For those who are curious or who want to follow up about WASM and WASI, I recommend two recent videos to help understand it all. But first, some opinion about the topic.

This is an insightful Twitter message from Solomon Hykes is the Founder, Chief Technology Officer and Chief Architect of Docker and the creator of the Docker open source initiative. 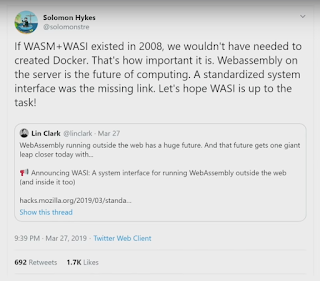 "Rust, WebAssembly, and the future of Serverless by Steve Klabnik"
https://www.youtube.com/watch?v=CMB6AlE1QuI 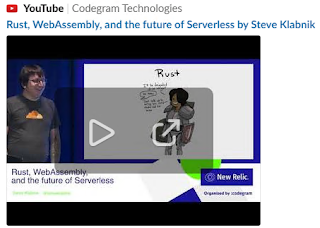 "Bringing WebAssembly outside the web with WASI by Lin Clark"
https://www.youtube.com/watch?v=fh9WXPu0hw8 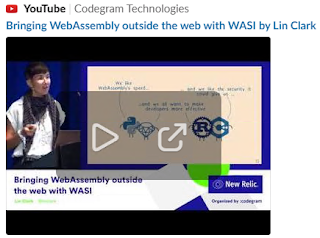 Picasa 3, the (discontinued) Photo Editor and Viewer was such a great piece of software... There are some replacements (eg. can think of XNView for instance for viewing, and many more for editing...) but none come close to how user friendly Picasa was.

So for those, like me, who want to run this fantastic thing, even if it hasn't been updated in a long time, but still works like a charm, I have an old copy of the installer I am sharing here:


I bet you can also find it on FileHippo.com, or some other archiving – file sharing service. But here it is anyway. Enjoy! ;-)

If using a deprecated software is not something for you but that you still need to browse high volumes of images scattered in directories, a quick and easy fallback back solution (even if it's not as nice) might be XnView:


This is a follow-up to one of my previous posts:

Chocolatey is like a package manager, but for Windows; a bit like the famous `apt-get` or `aptitude` for some GNU/Linux distros (...) I have created a curated list of my favorite ones; the ones I would install right away on a new computer, whether it is for work or even for home computing.


Therefore, to run any of the commands listed below, you will first need to install Chocolatey itself, which can be easily done with a simple command, so make sure you first check this post:

After completion, you may invoke commands such as:

# veracrypt competes with BitLocker on Windows, which works fine


# the winbtrfs driver does not work for me
# (but that has nothing to do with Chocolatey)
# I might give it another try at some point though...
choco install -y winbtrfs


If you want to check if an application is included to the Chocolatey distribution service, or if you want to know its exact name, you may use the "choco search" command.


An even faster way to call for an installation of a piece of software is to use "cinst" instead of "choco install".

Also, according to the help instructions, it should be possible to specify multiple application after the "choco install/cinst" command.

So we can therefore condense the previous list of calls into on single command (although I wrote on multiple lines and escaped using the backtick character, we should be able to copy-paste it just like that):

REMARK #1: Some (generic) lists may include an install instruction multiple times, usually at the beginning or the end of the script, this is on purpose. Lists like this can have multiple purposes and can be partially copy-pasted if we're only interested in a subset of the list. And running the same install request multiple time will only cause it to be ignored (unless the "--force" parameter was used, which is not the case).

REMARK #2: Also some pieces of software require very specific configuration, such as a VNC server, and we're better off running them separately, or at the very beginning and letting the rest of the automated install to carry on...
- tightvnc


REMARK #3: Some software may not be suitable for being installed on the system disk if it deals with data located on an independent disk of a virtual machine, in which case it's advised to use a portable application which you would install manually:

REMARK #4: I personally use my favorite (and most important) software in the form of portable programs, which I update myself, in which case it has to be removed from the default list:


Other, ready to paste, multi-line commands such as the one above, can be found at this address:

1/ The hidden rationale behind the word "testing"


• Testing vs. Checking
◇ [ ] "Testing" is explorative, probing and learning oriented.
◇ [ ] "Checking" is confirmative (verification and validation of what we already know). The outcome of a check is simply a pass or fail result; the outcome doesn't require human interpretation. Hence checking should be the first target for automation.

REMARK: We can see that speaking of “UnitTests” is actually not the best thing we came up with. We should rather be saying “UnitChecks”. But never mind.


• Operating
◇ [ ] Revert-based (each session starts from a well-known state, typically a virtual server snapshot)
◇ [ ] or Rolling (when nothing goes wrong, the testing server may have an ever increasing uptime)

The categories below are fairly volatile: the tests may move to a different category as the system-under-test grows older.

Hey, I came across an interesting piece of technology, I don't have time to experiment with it immediately (and fully understand how we could make use of it), but I wanted to share this with you right away, in case any of this rings a bell to something that might apply to things you are working on:


First, there is this thing called Diffy (developed by Twitter), which tackles some problems I am actually familiar with, in terms of Non-Regression Testing:

Diffy finds potential bugs in your service by running instances of your new and old code side by side. It behaves as a proxy and multicasts whatever requests it receives to each of the running instances. It then compares the responses, and reports any regressions that surface from these comparisons.


Second, when you look at how Twitter is implementing WebServices, they go through something called Thrift (developed by Facebook and "given" to the Apache Software Foundation)... I've looked up how this could interoperate with IIS, and it appears that can be used through IIS Handlers:

The Thrift .Net library includes an HttpHandler THttpHandler which implements the IHttpHandler interface for hosting handlers within IIS. Documentation of how to use the handler is very sparse. Below are instructions of how to create a Thrift service using THttpHandler.

Preview of a sample IIS config:


Both Diffy and Thrift are interesting since they tackle problems I am familiar with:

Anyway, just wanted to say that's something we should look into, and understand, for when we design testing strategies...
Posted by p19z at July 04, 2019 No comments: